In the meeting with the Undersecretary, both signed a Memorandum of Understanding for the creation of a High Level Commission, which seeks to be a meeting point between high authorities of both countries, whose objective is to strengthen relations through cooperation and the strengthening of mutual trust.

During the meeting, the Undersecretary stated that the presence of a high Indian authority in Chile was a clear sign of mutual interest in strengthening relations of friendship, exchange and cooperation. He also appreciated India's progress in development and economic growth, and acknowledged the importance that it has gained as a regional and global power. 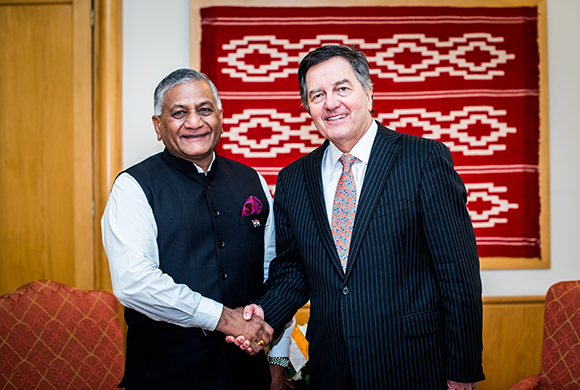 In the area of trade, they expressed their interest in progressing from the Agreement on Trade Enhancement, which entered into force in May 2017, to a more comprehensive agreement that would include chapters on investment and trade in services.

At the multilateral level, they shared their views on international current affairs and addressed the issues on the regional agenda. They also discussed opportunities to strengthen ties in initiatives such as the International Solar Alliance, which facilitates cooperation and exchange on energy issues.

After the meeting, the Undersecretary offered a luncheon, in which authorities, businessmen and academics participated.