The Undersecretary of Foreign Affairs, Edgardo Riveros, today presided over the Fourth Meeting of the National Council for the Implementation of the 2030 Agenda for Sustainable Development, at which the work accomplished to date was reviewed and the set of actions of the 2018-2020 Work Plan was agreed upon.

The meeting was attended by members of the Council: the Minister of Social Development (MDS), Marcos Barraza; the Minister of the Environment, Marcelo Mena; the Undersecretary of Social Evaluation of MDS, Heidi Berner; and the Director of the National Statistics Institute, Ximena Clark.

The meeting examined the reports of the Commissions and Working Groups established to implement the 2030 Agenda in Chile, discussed the main advances and challenges set out in the Initial Diagnostic Report on the 17 Sustainable Development Objectives (ODS) and presented the work done in defining indicators, which will allow progress to be monitored and guided in each of the SDGs under specific and measurable parameters. A draft Work Programme for the 2018-2020 period was also approved. 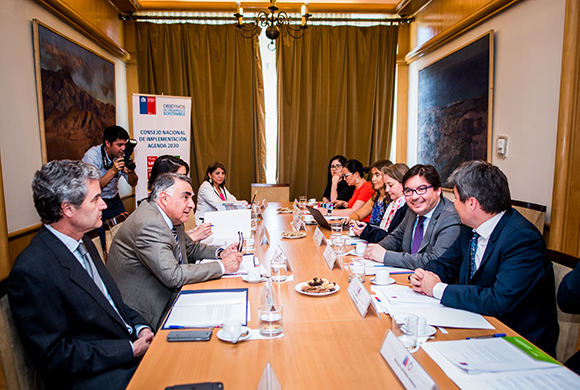 The Undersecretary highlighted the progress made by our country in relation to the implementation of the 2030 Agenda, and urged us to face up to the major pending challenges, which include strengthening coordination work between the public sector and other actors, including the private sector, civil society, the trade union world, among others, ensuring budgetary resources for its implementation, highlighting particularly the need to advance in the definition of a National Sustainable Development Strategy, under a "National Strategy for Sustainable Development".

The 2030 Agenda and the 17 SDGs were adopted by the United Nations General Assembly on the 25th of September, 2015. This corresponds to a common and universal plan of action for people, the planet and prosperity, which seeks to strengthen universal peace and access to justice. It sets out 169 ambitious goals covering all three areas of sustainable development, the social, economic and environmental areas, and has as its main aspiration "to leave no one behind", eliminating hunger and extreme poverty. Also, in July 2017, Chile submitted the national voluntary review on the implementation of the 2030 Agenda and the SDGs to the United Nations High Level Political Forum on Sustainable Development, confirming its commitment to this global endeavour.