The purpose of the citation from the Upper House was to address the situation in Venezuela and the Foreign Minister's participation in the General Assembly of the Organization of American States (OAS), held last week in Washington D.C. Also, to analyse the situation in Nicaragua. The Secretary of State also provided background information on the extension of the time limit granted to Bolivia by the International Court of Justice in the Silala case.

During this session, the Agreement between the Republic of Chile and the Republic of Peru on Reciprocal Recognition and Exchange of Driver's Licenses was approved and is ready for review by the Chamber. This will allow nationals who hold valid driver's licenses, issued by the competent authorities of both countries, to exchange their Chilean or Peruvian driver's license for the license that corresponds to their country of residence, without the need to take theoretical or practical exams.

Subsequently, the Chancellor attended the Foreign Affairs Committee of the Chamber of Deputies, where he referred again to the crisis in Venezuela and Nicaragua. During the session, the initiation of the studies of the draft Trade Agreements with Argentina, of the Comprehensive Economic Partnership Agreement with Indonesia and of the deepening of the Free Trade Agreement with China was approved, which from now on will be considered by the Finance Commission.

Prior to his participation in the Chamber, Minister Ampuero received recognition from the UDI's bench of deputies for his commitment to human rights and for his response to Venezuela during the OAS General Assembly. The gift was a spyglass, for him to keep a "close eye on the faithful observance of Human Rights in Latin America and the world", said the head of the bench, Javier Macaya. 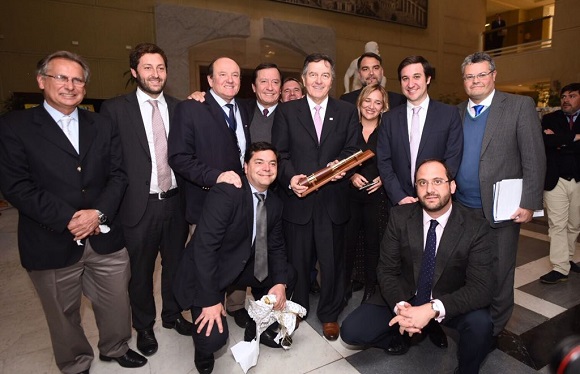 "When you are Chile's Foreign Minister you represent Chile's dignity and its respect for human rights, its commitment to international law and the principles of freedom and democracy. That is what I defended in the OAS on behalf of Chile, on behalf of the government of President Sebastián Piñera and all Chileans," said the Secretary of State after receiving the gift.

At the end of the session in the Chamber of Deputies, the Chancellor declared: "There was great interest on the part of the members of the Foreign Affairs Committee regarding the situation in Venezuela. I am very happy to have taken part in this meeting, it was very frank and we talked about the situation that took place in the OAS, what the resolution on Venezuela was like, I also informed you about the situation that exists in terms of the economic crisis in Venezuela, the crisis of coexistence, the democratic crisis, we saw each of the aspects".

Along with this, the Minister added: "The parliamentarians also raised concerns about how this will be resolved. We were talking about the alternatives, I spoke about the importance of the Lima Group, which is a group to which Chile belongs, which is a group that is seeking a solution that is negotiated peacefully and politically, with dialogue. And one thing that is very important is that Venezuelans are called upon to resolve this issue in a peaceful, negotiated and international community way, and what is required of them is to support an alternative that points to how to solve this tense, serious and very delicate crisis that the Venezuelan people are facing".