The XV Mechanism for Political Consultations Meeting between Chile and the People's Republic of China took place this Tuesday in Beijing. The meeting was lead by the Undersecretary of Foreign Affairs, Carolina Valdivia, and the Chinese Vice-Minister of Foreign Affairs, Qin Gang.

During the meeting, various topics were discussed, such as the state of Sino-Chilean relations, the regional situation in Latin America and Asia. They also highlighted Chile's role as host of the meetings of the Asia-Pacific Cooperation Forum (APEC) and COP25, which will take place this year in Santiago.

The activities to be carried out next year in the framework of the celebration of the 50th anniversary of the establishment of diplomatic relations were also discussed, and opinions were exchanged on the diversification of bilateral links towards new areas of convergence. The meeting also provided an opportunity to learn more about the La Franja and La Ruta initiative, whose second International Cooperation Forum will take place in Beijing at the end of April.

Chile and China have maintained a Comprehensive Strategic Partnership since 2016, and in 2015 they agreed on a Joint Action Plan. China is currently our primary trading partner. 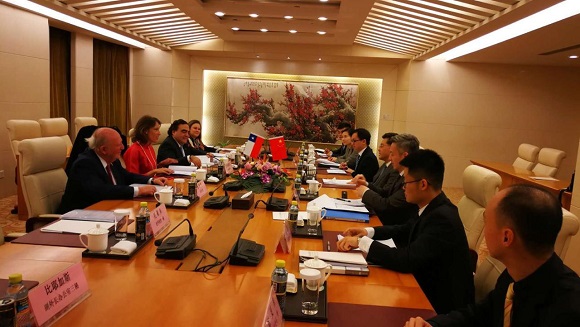