The Minister of Foreign Affairs, Andrés Allamand, joined by the Undersecretary for International Economic Relations, Rodrigo Yáñez, met virtually with the Foreign Minister of Indonesia, Retno Marsudi, with whom they discussed various issues regarding bilateral cooperation between the two countries. 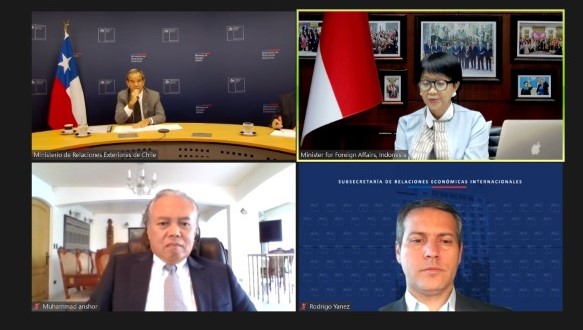 During the meeting, they shared experiences around the management of the Covid-19 pandemic and the vaccination process that is taking place in both countries. There was also space to discuss the joint work between the Institute of Public Health and the Food and Drug Authority of Indonesia.

The authorities also highlighted the idea of ​​Chile being Indonesia's gateway to the region.

Finally, both Minister Allamand and Undersecretary Yáñez highlighted Chile's interest in joining the ASEAN-Australia and New Zealand Free Trade Agreement (AANZFTA), which would imply joining an area of ​​663 million inhabitants.