The Chilean orchestra of children and youth, Ernesto Guarda Carrasco, part of the Juan Sebastián Bach School of Music in Valdivia, gave an outstanding performance in Berlin, Germany, under the direction of Alejandro Torres Farfán.

The young musicians presented works whose classical symphonic structure merges with traditional elements of Chilean and Latin American music, a variety that is also reflected in the instruments, from the cello and violin to the charango and the leguero bass drum.

"I wish you a lot of success and a lot of beautiful experiences on this trip. Hopefully you will return to Chile with new energies to continue with this wonderful work", said the Ambassador of Chile in Germany, Cecilia Mackenna, who received them at the Embassy.

As part of the "Sonamos Latinoamérica" festival, the Berlin concert took place at the Instituto Ibero Americano IAI, and was initiated by Rodrigo Santa María, a Chilean musician and composer based in Berlin. His music is also characterized by the combination of folkloric and classical influences and revives the musical richness of Latin America. 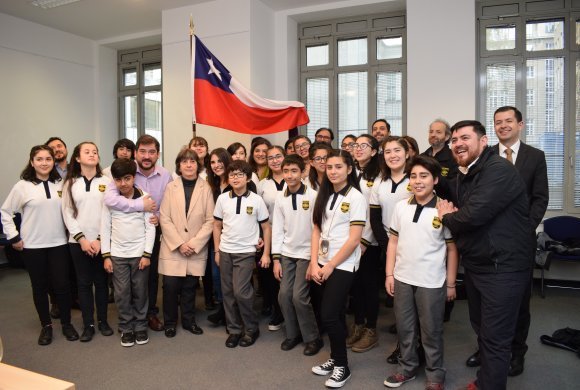 The director of the orchestra, Alejandro Torres Farfán, in his greeting before the concert, stressed that in the case of the Bach school in Valdivia it is a public high school that also gives opportunities to children to develop their talents.

The orchestra is made up of children from fourth to eighth grade and has already participated in numerous music festivals in Chile and abroad. During the presentation, musicians were also invited, who although not part of the orchestra, accompanied the young musicians. Among them were Yanina Lombardi on saxophone, Natasche Jaffe on cello and Ernesto Villalobos on flute, as well as the renowned tenor Felipe Rojas Velozo, based in Germany.

This children's orchestra has existed for 17 years, and carries the name of Ernesto Guarda Carrasco, who was a teacher for generations of musicians. His work is of great importance for musical life, especially in southern Chile during the second half of the twentieth century.