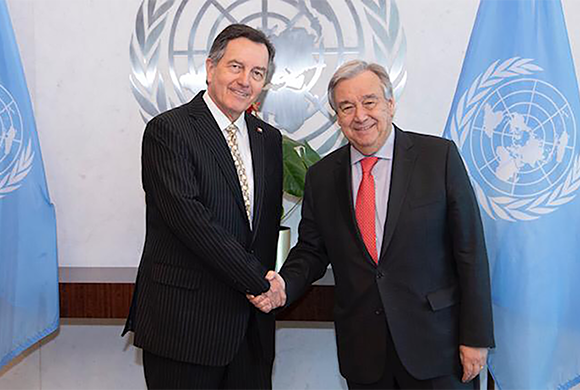 A productive meeting held today in New York, the Minister of Foreign Affairs, Roberto Ampuero, with the Secretary-General of the United Nations, Antonio Guterres. After the meeting, the Foreign Minister stressed that the highest authority of the international organization "highlighted the fact that Chile is playing a role as a bridge between actors seeking a peaceful and political solution to the crisis in Venezuela."

Tomorrow, meanwhile, the Minister will hold a working meeting with the High Representative of the European Union for Foreign Affairs and Security Policy, Federica Mogherini. Later, he will meet with the President of the Security Council and French Ambassador to the United Nations, François Delattre. In both events, the crisis in Venezuela will be addressed.

In this regard, the Chancellor said that "Chile will continue to act in this direction, seeking spaces of convergence among all those who want to contribute to the solution of the dramatic crisis that Venezuela is going through."