Minister Ampuero thanked the officials of the Ministry of Foreign Affairs after The Hague ruling: "Be proud to work in this centennial institution"

The Minister of Foreign Affairs, Roberto Ampuero, along with Undersecretary Carolina Valdivia and Agent Claudio Grossman, greeted the officials of the Ministry of Foreign Affairs in gratitude for their work in the face of the lawsuit filed by Bolivia before the International Court of Justice and whose judgment ruled that Chile has no obligation to negotiate a sovereign exit to the Pacific Ocean.

"I invite you to take this moment of recognition that the country has given to each one of you, to feel the pride of working in this hundred-year-old institution where many people also represent us outside under very difficult circumstances and conditions, far from their families and sometimes under conditions that endanger their safety," said the Foreign Minister in his speech. "Along with celebrating and realizing what we have achieved, we must also move on to another moment and looking to the future," he added.

For his part, Agent Grossman pointed out that "what we have done, seeing the national unity of the country, has been a source of satisfaction and pride. I wish people would see in this success, as well as other triumphs, the triumph of the Chilean Foreign Ministry because here there is not only a juridical triumph, that in the expressions and the scope of the International Court of Justice. What the Foreign Ministry has done has been to represent the interests of Chile, the value of international law, without dissonance, with seriousness and sobriety," he concluded. 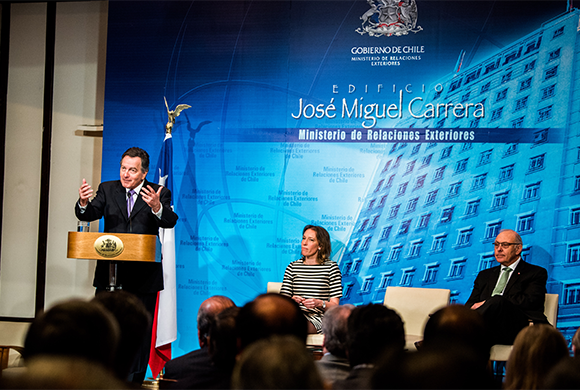