Minister Ampuero accompanied President Piñera in the presentation of indications to the Migration Bill: "This is great news for the country"

The Minister of Foreign Affairs, Roberto Ampuero, described as "great news for the country" the indications that the President Sebastián Piñera presented today to the Migration Bill, in a ceremony held at the Palacio de La Moneda.

"We are a welcoming country, we are open to migration, but we also want an orderly migration. We want a migration that is dignified. We want those migrants who arrive in Chile to be able to really fulfil their dreams of a better life," said the Secretary of State after the ceremony led by the President.

In addition, a Migration Policy Council is created, whose task will be to formulate and periodically update a clear and transparent migration policy for our country; and a National Migration Service, which will have the structure and capacity to carry out the implementation of migration policy, and will act as the state channel to interact with migrants. 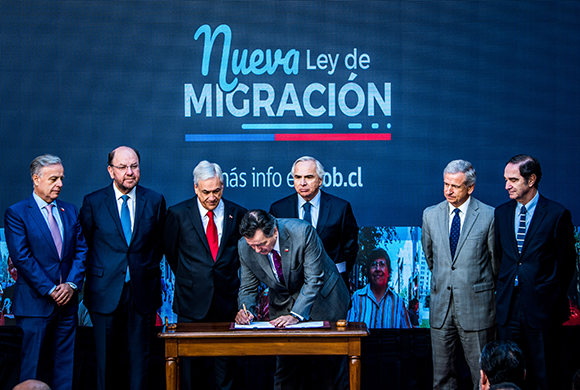 It also establishes a flexible system of immigration categories, decriminalizes irregular residence and eliminates criminal penalties for immigration offences. On the other hand, the expulsion process is simplified and speeded up for foreigners who have violated the Immigration Law.

These indications will come with a series of fast-track measures including a reformulation of temporary residence visas and the creation of new visa categories for people wishing to work or study in Chile.

Among the initiatives, the most important is the Democratic Responsibility visa, especially for Venezuelan citizens, which must be applied for at the Chilean Consulate in Caracas and will grant a temporary residence permit for one year, extendable for one year and which makes it possible to apply for definitive residence.

Meanwhile, as of April 16, all Haitian citizens who wish to enter the country for no purpose other than immigration, residence or remunerated activities will be required to obtain a simple consular tourist visa, with the right to enter and stay in Chile for a maximum of 30 days. In addition, there will be a 12-month visa for humanitarian purposes for family reunification.

President Piñera also announced that an extraordinary process will be opened to gradually regularize those foreigners who remain in the country in an irregular situation and who do not have a criminal record in their country of origin or in Chile.

"These are the principles that guide us and the measures that we propose or that we have already adopted in order to care for and organize our common home, our shared home, promoting a modern migration policy that encourages safe, orderly and regular migration, adapted to the current times and the needs of the country, but without ever losing sight of the rights and protection of migrants," said President Piñera.

Currently, there are nearly one million immigrants residing in Chile - representing 5.5% of the population - of whom it is estimated that more than 300,000 are in an irregular situation.