Foreign Minister regarding Chile-Peru 2+2 meeting: "it's a symbol of the good times both countries are going through"

The Minister of Foreign Affairs, Roberto Ampuero, participated today in the VI Meeting of the Permanent Committee for Consultation and Political Coordination between Chile and Peru, known as the 2+2 mechanism, which brings together the Ministers of Foreign Affairs and Defence of both countries. 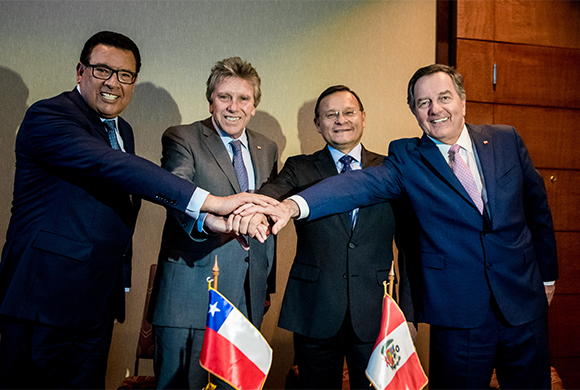 At the end of the meeting, which took place at the Sheraton Hotel, the Chancellor emphasized that with Minister Néstor Popolizio: "We have taken a coincidental look at the main themes of the Latin American reality, of our relations in bilateral terms, of the regional panorama and of international politics".

Along these lines, he stressed that the holding of a meeting of these characteristics "is a symbol of the good moment that both countries are going through". Along with this, the minister highlighted the high level of bilateral relations: "I want to highlight the atmosphere that has reigned here, I want to emphasize that the meeting has run very positively, very quickly, noting the tremendous coincidences that exist between the two countries".