Foreign Minister Muñoz met with his Chinese counterpart and highlighted the friendship between the two countries: "Our relations will continue to strengthen"

Foreign Minister Heraldo Muñoz met today with his Chinese counterpart, Wang Yin, in the framework of the II Community of Latin American and Caribbean States (CELAC) Forum with China, which takes place at the Sheraton Hotel in Santiago and whose meeting of Ministers of Foreign Affairs will be held tomorrow in the same place, with the presence of 31 countries and 25 foreign ministers. 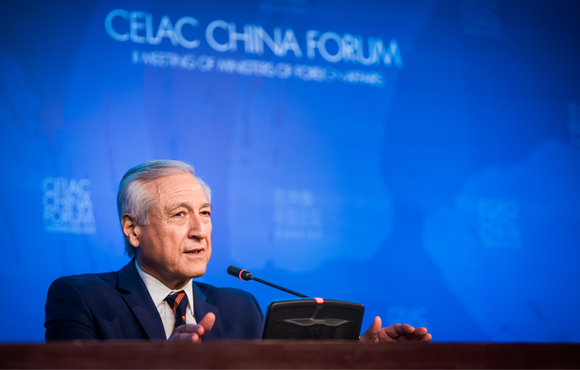 The Secretary of State also highlighted the similarities between the two nations. "We support multilateralism, cooperating to tackle problems such as climate change and natural disasters together. We are in favour of cooperation and dialogue to confront complex problems such as North Korea's nuclear weapons or to confront the crisis situation in Venezuela".

In addition, Chancellor Muñoz reported, "we have talked about the enormous progress we have made in economic matters. Trade relations between the two countries are reaching more than 34 billion dollars. That means 17% more compared to last year".

With regard to the main issues that will be discussed tomorrow at the II Meeting of Foreign Ministers CELAC-China, the Secretary of State indicated that "we will discuss many things, including a very interesting initiative from China, 'One Belt, One Road', which aims, in a way, to recreate the Silk Road in the 21st century, through connectivity, through investment, trade, in a way that will benefit the world's poorest countries".

The Minister also said that "we are in uncertain and complex times and China is playing a very constructive role in addressing these complexities". In that sense, he pointed out that "like Chile, China has a stance of rejecting protectionism, of favouring openness, connectivity, investment, trade, cooperation in important matters for Chile such as innovation and also for the rest of the countries of Latin America and the Caribbean".

It should be noted that the motto of the II Meeting is "CELAC-China: Working for further development, innovation and cooperation for our people", which in turn is based on the two pillars that guide the framework of this Forum: a) convergence in diversity and b) Agenda 2030 and the Sustainable Development Goals.

The CELAC-China Forum seeks to establish an integral cooperation partnership with a new structure of relations between the member countries of the bloc and China, based on equality, mutual benefit and common development. Politically, it aims to build trust, while economically it seeks to strengthen cooperation, shared benefits and mutual learning.