The countries that make up the Lima Group, together with Guyana and Saint Lucia, which joined the group today, signed a joint statement rejecting "the decision of the Government of Venezuela to call presidential elections for the first quarter of this year". The declaration was read by the Minister of Foreign Affairs, Heraldo Muñoz, at the end of the meeting held at the Sheraton Hotel in Santiago, the fourth meeting of this group since it was formed in August 2017.

The document, signed by 14 countries, also requires "that the presidential elections be convened with adequate anticipation, with the participation of all Venezuelan political actors and with all the appropriate guarantees, including the participation of independent international observers". 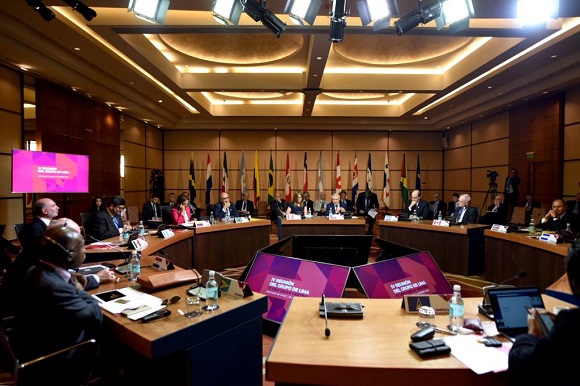 In addition, it condemns "the acts of violence, with the consequent loss of human life" and urges "the Venezuelan Government to urgently adopt measures to guarantee the rule of law, the fundamental rights of individuals and to recover social peace".

After reading the 10 point document, Foreign Minister Muñoz affirmed that "the unilateral call of the Venezuelan government for presidential elections in the first quarter and without the minimum guarantees of democratic, transparent elections, according to the standards that exist in an election in any democratic country, means a serious objection to Chile's participation in this process". In this regard, he added that if "this situation is consolidated, Chile will review its participation in the group of accompanying countries" of the dialogue process that is taking place in the Dominican Republic between the Venezuelan Government and the opposition of that country gathered in the Mesa de Unidad de Democratica (MUD).