Foreign Minister Ampuero: "We have in the person of Evo Morales a candidate in the middle of his campaign, and his main theme is hostility towards Chile"

The objective of the meeting was to jointly address a series of issues of Chile's foreign policy, as well as to specifically review the status of our country's trials with Bolivia before the International Court of Justice in The Hague.

In this regard, the Chancellor stressed the unity of parliamentarians on these issues, emphasizing the presence of deputies and senators from all political sensibilities. "We are very proud to be able to show that Chile, when it defends its interests, does so as a whole, with a single voice, as a State policy," said the Minister. 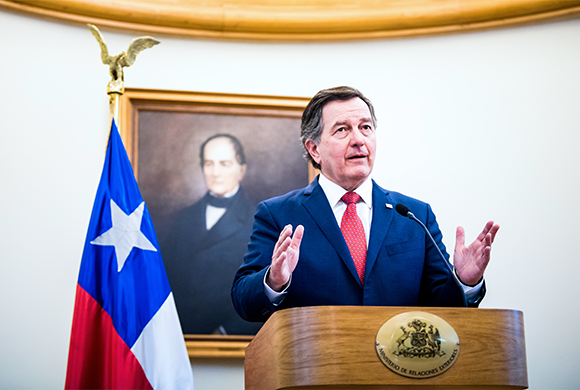 In addition, the Minister recalled a series of promises Morales had made to the Bolivian people: "First, he offered that Chilean territory would become Bolivian, second, he offered that Antofagasta would also become Bolivian, and he also affirmed and promised his people that Bolivian flags would soon be flying in our Pacific. President Evo Morales himself, today's candidate for the Presidency, in the race for the Presidency of the Republic again, has set the bar very high, and his people will judge him on this. He has promised his people certain things; his people will evaluate him for what he achieves".