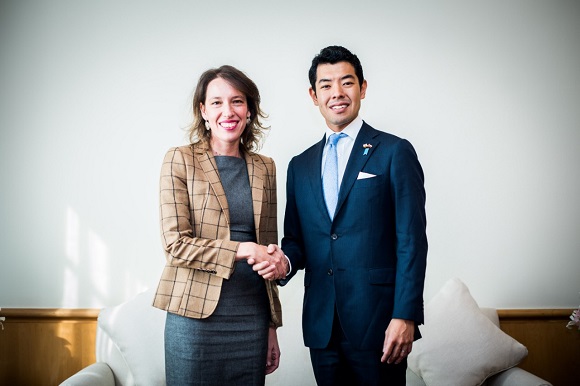 This Thursday the Undersecretary of Foreign Affairs, Carolina Valdivia, met with the Parliamentary Vice-Minister of Foreign Affairs of Japan, Kiyoto Tsuji, visiting our country for the APEC Trade Ministers Meeting, held in Viña del Mar on May 17th and 18th.

During the meeting, the excellent state of the bilateral relationship between both countries, which reflects in the upcoming visit of President Sebastián Piñera to Japan to attend the G-20 Meeting –to be held in Osaka between June 28 and 29–, and the visit of Prime Minister Shinzo Abe to Santiago to participate in the APEC Leaders' Meeting, –on November 16th and 17th–, was highlighted.

Also, ideas about the next COP25 –that will take place in Santiago between December 2nd and 13th on this year – were shared in the meeting, stressing the efforts of both countries to reduce carbon emissions and face climate change.