Minister Teodoro Ribera: "Increasing commercial exchange with the United Arab Emirates and attracting its investment funds is a priority for this Ministry"

In a day in which the first stone of Chile's stand at the Expo Dubai 2020 was laid, the national delegation, headed by the Minister of Foreign Affairs, Teodoro Ribera, held meetings with the Minister of State for International Cooperation, Reem Al Hashemy, the Dubai Chamber of Commerce and the Dubai Sovereign Investment Corporation, which manages over US$ 250 billion.

"We may have differences regarding the way we will be solving social demands, but there are no two opinions regarding the fact that in order to finance them it is necessary to accelerate the growth rate; and in this context it is essential to have the capacity to attract investments and increase exports, diversifying and deepening markets," said Foreign Minister Ribera at the end of Sunday's session.

The Chilean delegation, which also included the director of ProChile, Jorge O'Ryan, the Chilean ambassador to the United Arab Emirates, Jorge Daccarett, and the president of the Exporters Association, Ronald Bown, began the day with a visit to the site where Expo Dubai will be held. On the occasion, the contract was signed with the construction firm Design Reveal Pavilion, with the presence of Chile's commissioner for Expo Dubai 2020, Álvaro Saieh. 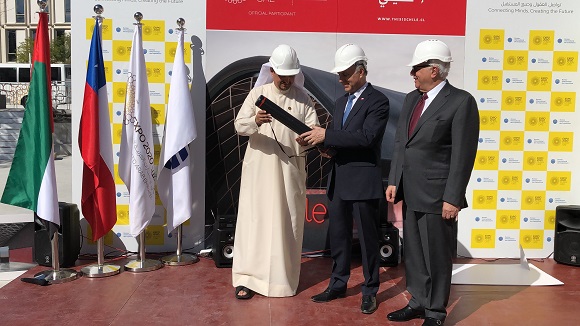 Today, the United Arab Emirates is the 33rd destination for Chilean exports, which represents 0.21% of the total, a very small figure if one considers that this nation is the 30th economy in the world and the 22nd in per capita income, which speaks of an exponential increase in the quality of its inhabitants in a very short period of time.

In this sense, the Secretary of State asserted that Chile has much to learn from the experience of this country that was born just 49 years ago: "The Arab Emirates is the sixth largest oil reserve in the world and if we see that its development is much higher than countries that have superior natural conditions in this area, we have to conclude that we have a path here to which we must pay much more attention in order to draw lessons. Today, increasing trade with the Arab Emirates and attracting its investment funds is a priority for this Foreign Ministry," he said.

The economy of the Arab Emirates is now diversified and oil contributes approximately 30 percent of GDP, thanks to strong investment in tourism, infrastructure and innovation, among others.

"We have raised not only the common challenges in terms of trade, but also that Chile is a country that requires investments in which the Arab Emirates in general, and Dubai in particular, are successful, such as renewable energies, efficient water use through recycling and desalination, infrastructure and innovation, among others," said Minister Ribera.

For his part, the Director of ProChile affirmed that "we have to go out into the world and ExpoDubai 2020 represents a great opportunity for Chile. The prosperity of our country depends in large part on foreign trade, generating more than 1,200,000 jobs and linked to 57% of the Gross Domestic Product."