Chilean Government arrives to Colombia with humanitarian aid for Venezuela

This Friday the President Sebastián Piñera together with the Minister of Foreign Affairs, Roberto Ampuero, arrived to the Colombian city of Cúcuta on the Venezuelan border, to deliver the humanitarian aid that the Chilean Government is giving to the Venezuelan people.

Both authorities were welcomed by the President of Colombia, Iván Duque, who thanked the presence of Chile, and held a press conference together with his Chilean counterpart.

"We have also come to contribute with the humanitarian aid for the Venezuelan people, who have undoubtedly suffered desperation and frustration from the lack of basic elements as medical supplies and food, for a long time now", remarked President Piñera. 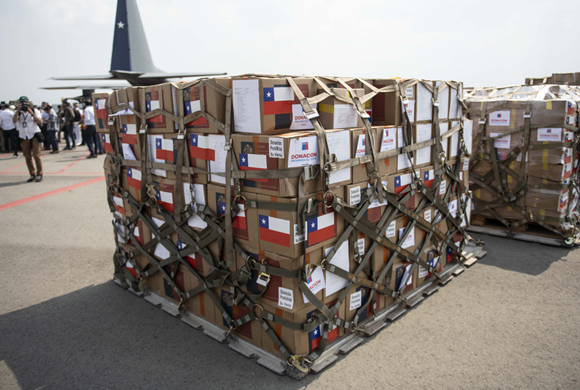 The first shipment, that arrived in a C-130 Hercules of the Chilean Air Force, consists of 8,6 tons of aid including 700 child hygiene kits –each one containing hygiene products meant for 30 days-, 200 food kits –meeting the needs of a family of four- and medical supplies such as antibiotics, antispasmodics, analgesics, antiseptics, medicine for asthma and chronic obstructive pulmonary illnesses.