Chancellor: "The Strip and the Route initiative is an attractive path that can provide an align perspective between countries, cultures and economies"

Monday, 13 May, 2019
Route, organized by the Foreign Affairs Committee of the Senate and the Chinese Embassy in Chile.

During his speech, the Minister highlighted the great relation between the two countries, remarking that 50 years of diplomatic bonds will be celebrated in 2020.

"Nowadays we can be proud of the solid and mature relationship we have built, which reflects in the fluid cultural, political and commercial exchange between both nations. I have no doubt this will continue to improve for the welfare of our citizens", said the Chancellor during his speech.

Also, the Minister pointed out the importance of this seminar, assuring that it was very relevant. "I hope this leads to a fluent exchange of ideas that can provide a better understanding of our international position on this important matter promoted by President Xi Jinping", he added. 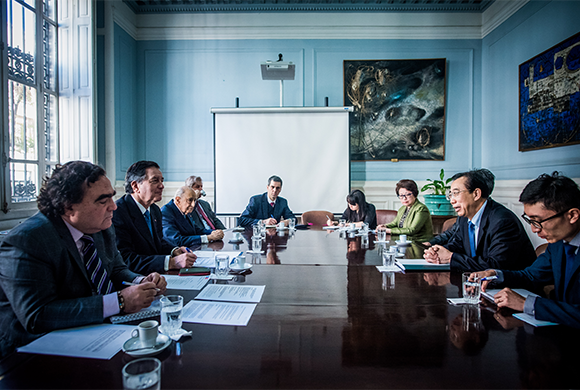 Regarding the importance of the The Strip and the Route initiative, Chancellor Ampuero highlighted that "Chile is willing to reaffirm, in the international forums in which participates, its firm commitment to the values of multilateralism and the principles of free trade with a clear and independent voice". And he added, "Based on this vision, we consider that The Strip and the Route initiative is an attractive path that can provide an align perspective between countries, cultures and economies".

At the end of his speech, the Chancellor declared: "Our participation in The Strip and the Route is not an isolated action, we must consider it next to other actions mutually reinforcing, such as; the organization of APEC 2019, the ratification of TPP11, today at the Congress for approval, the invitation to participate in the G20 in Osaka next June, or our Pro Tempore Presidency in the Pacific Alliance, which also seeks an approach to Southern Common Market and an efficient projection of our economies towards the Pacific".