Chancellor Ribera held bilateral meetings with his counterparts from Norway, Ireland and Finland

Monday, 23 September, 2019
The Minister of Foreign Affairs, Teodoro Ribera, today held three bilateral meetings with countries that show interesting advances in environmental protection and in public policies developed in areas of deep interest to Chile.
Regarding his meeting with Norway's Foreign Minister, Ine Eriksen, the Secretary of State declared: "We address the need to accelerate the modernization of the agreement between Chile and the European Free Trade Association, EFTA, which brings together countries on that continent that are not part of the European Union, especially with regard to access to that market for our agricultural products. In addition, the minister added that among the topics discussed were cooperation on energy, oceans and Norway's role as facilitator in the suspended dialogue on Venezuela. 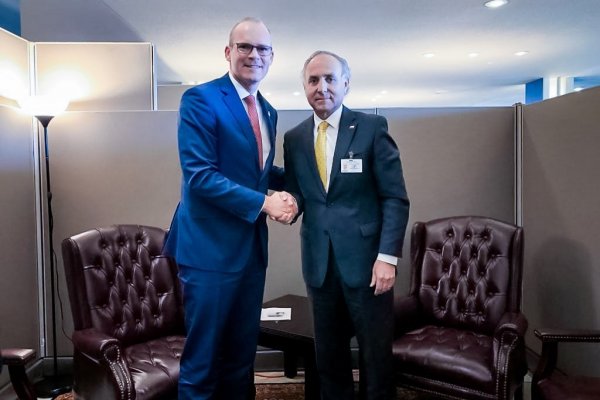 With his Irish counterpart, Simon Coveney, the dialogue revolved around the modernization of the Agreement between Chile and the European Union, which has already been in its ten round of negotiation on its political and trade pillars. Regarding this meeting, Chancellor Ribera declared that "its purpose was to review the bilateral agenda, to see those meeting points and mainly to look for greater possibilities to promote reciprocal trade. The Ministry of Foreign Affairs is totally focused on expanding the destinations of our products because that can counteract the negative effects that is producing the situation that today confronts the United States with China".

Finally, the bilateral meeting with Finland's Chancellor, Pekka Haavisto, also addressed the modernization of the Agreement between Chile and the European Union and Finland's experience in developing 5G technology and clean energy projects.
Chancellor Ribera explained that these dialogues intensify the efforts made by Chile's Ministry of Foreign Affairs to help diversify the markets to which Chilean products have access, in the midst of the uncertainty generated by the commercial war.