Chancellor met with Parliamentary Vice-Minister for Foreign Affairs of Japan 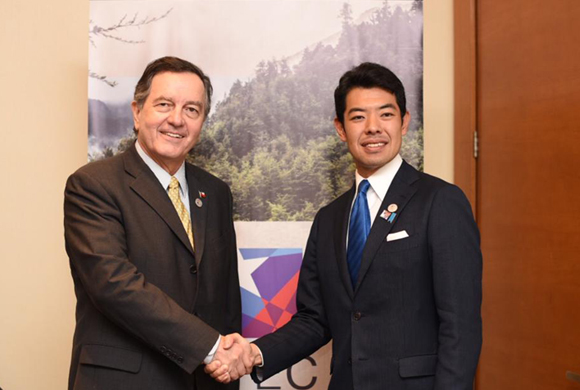 In the framework of APEC 2019 Trade Ministers Meeting, held in Viña del Mar between May 17th and May 18th, Foreign Minister, Roberto Ampuero, met with Kiyoto Tsuji, Parliamentary Vice-Minister of Foreign Affairs of Japan.
In the meeting, both authorities referred to the high quality bilateral relations held by Chile and Japan. Kiyoto Tsuji highlighted the work done by Chile in 2019 as host of the APEC Trade Ministers Meeting.
Meanwhile, Minister Ampuero thanked President Sebastián Piñera´s invitation from Japan to attend the G-20 Meeting, to be held in Osaka from June 28th to June 29th. He also shared the legislative advances in the ratification of TPP11 and Chile's commitment to the environment.