You are in:  Home
Under-Secretary Riveros heads Political Consultations and signs Working Holiday Agreement with the Czech Republic
Comparte : Twittear

Today, the Under-Secretary of Foreign Affairs, Edgardo Riveros, led the 5th Meeting of Political Consultations between Chile and the Czech Republic, together with the Deputy Foreign Minister of that country, Martin Tlapa. At the meeting, the officials highlighted the excellent state of bilateral relations and pledged to strengthen those ties.

"It was a very positive meeting. It was very fruitful dialogue. We discussed a number of issues of bilateral relations and also talked about the European Union – topics on the agenda that we had prepared in agreement," said the Chilean authority at the end of the meeting.

With regard to the bilateral economic relationship, during consultations they stressed that Chile is the fourth most important partner of the Czech Republic in Latin America and agreed on the need to strengthen and enhance trade. In 2014, trade between the two countries reached US $ 62.3 million, a 1.1% increase from 2013.

Under-Secretary Riveros expressed the interest of our country to modernize the association agreement with the European Union. The Czech Republic reiterated its intention to formalize its request to become an observer state in the Pacific Alliance. 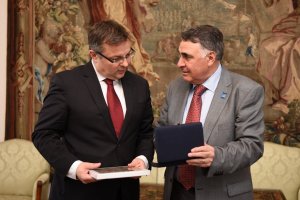 They also referred to cooperation in the academic, cultural, scientific, innovation and energy fields. "The Czech Republic has had important industrial development. The energy issue also covered an important part of our agenda. They have experience in clean renewable energy and that is important for [Chile's] development," said the Under-Secretary.

Chile and the Czech Republic also exchanged views on the various existing regional integration processes, both in Europe and in Latin America, the situation in various Latin American countries, and the migration crisis in Europe.

Subsequently, Under-Secretary Riveros had a meeting with the Czech Foreign Minister, Ludomír Zaorálek, and signed an agreement with the authority for a Working Holiday. Its objective is so that citizens of both countries can vacation in the other country and carry out temporary work during their stay, thanks to a residence visa for a period of 12 months.

The Czech Minister noted that this is the first agreement of its kind signed with a Latin American country, and the fourth worldwide for the Czech Repulbic. 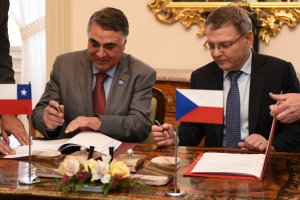 The agreement that was signed does not provide a limited number of nationals eligible, but rather all those who meet the requirements may enter the other nation. Eligible persons must be between 18 and 30 years old. They must also demonstrate financial solvency, possess a return ticket to their home country, and have a certificate of insurance, among other basic requirements such as having no criminal records and their documents to date.

"The exchange of people going to vacation and at the same time working is very important to support mutual understanding," remarked the Under-Secretary following the signing.

Along with the Czech Republic, Chile has signed this instrument with nine other countries: New Zealand, Australia, Denmark, Germany, Colombia, Mexico, Peru, South Korea and France. The first agreement was signed on March 30, 2001 with New Zealand. Moreover, other agreements on youth mobility and exchange of interns were signed with Canada and Switzerland.